‘The main reason I bought so many of the paintings was that they were a surprise, if not a shock, and I wanted to find out how he got that way.  Besides, I felt he was making creative use of certain traits of the work of Bosch, Tintoretto, Van Gogh, Daumier and Cézanne, and was getting new effects with colour’

‘Houses’ (1920-21) – a group of twisting, contorted buildings pinioned between land and sky – is one of the surviving Céret landscapes painted by Chaïm Soutine. This painting, now in the Musée de l’Orangerie, Paris, shows the subjects linked and interdependent, yet, at the same time, individually competing for their space in the landscape.

“This would be unbearable on acid”, said one of my friends on his first visit to the museum’s Soutine rooms.  And his work does have a hallucinogenic quality.

Soutine is an artist who destroyed to create, willing to slash and burn his paintings to ashes, keeping only the versions he liked, a process that has resulted in infusing them with an unsettling intensity. 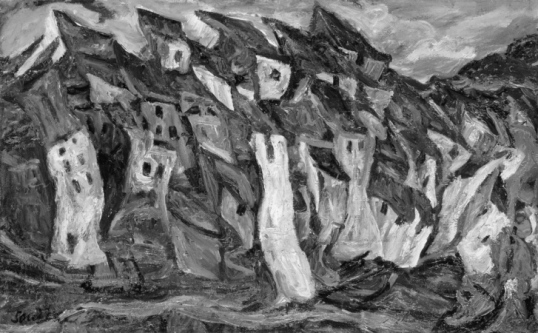 But consciously or not, this painter of swooping churning anguish reigned himself in and probably saved his sanity with the use of restraining external influences.  He played Bach, the most ordered mathematically precise composer, when he painted; he adapted his primal social behaviour in the company of his highly-cultured patrons, the Castaings, and throughout his career he reworked the old masters, respectful and always mindful of their discipline.

Soutine was stirred by the work of Rembrandt whom he revered, and was particularly fascinated by his idol’s depiction of flesh, returning to an interpretation of the Louvre meat carcass more than once.  His one-time neighbour, the writer Henry Miller described his preoccupation with flesh as an obsession.

The way in which many of Soutine’s images produce an effect of life in death, notably the poultry and bulkier carcasses – mouths, beaks and eyes open wide – make us feel we have just missed the slaughter and that only moments ago these were living creatures.

Indeed, Soutine’s carcasses seem more alive than many painters’ live subjects. Adjust the canvas by 90 degrees and his ‘Hare Against Green Shutter’ (1925-26) would be seen to be loping along!

Soutine worked in spates, not painting for days, weeks or even months, and then would set to with a ferocious intensity, often for many hours at a time.  The decomposing animal carcasses sometimes had to be infused with formaldehyde to dull their stench.

It was testing for his sitters, even verging on cruelty.  Determined to see through their surface appearance, Soutine subjected them to long days and weeks of concentrated and sustained looking followed by furious action. One of his models tells of being made to pose for so long that it verged on a hallucinatory experience for both of them.

While no group claimed him, Soutine is classed as an Expressionist. Essentially though, his art is his direct response to confronting nature, and his trademark intensity is probably due to his working in isolation in France, away from the influence of the Expressionist group of artists based in Berlin, Munich or Vienna.

Soutine was not one for words.  He neither kept diaries nor written correspondence about his work, and whether he made preparatory drawings remains contested.  If he did, then like many of his canvasses, he probably destroyed them.  What remains is a small collection of photos taken throughout his life and the paintings. 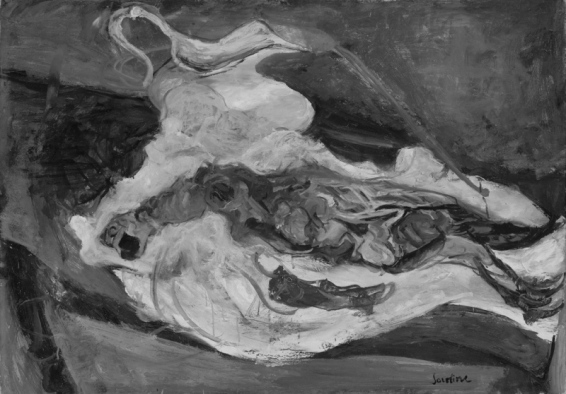 ‘Still Life with a Pheasant, circa 1924, oil on canvas, Musée de l’Orangerie

Soutine grew up in the small, poverty-stricken Jewish village of Smilovitchi, Belarus.  His father, a strict disciplinarian and devout Jew, discouraged him from pursuing his interest in art for which he had shown a marked talent from an early age.

Despite much opposition, he eventually moved to Minsk and embarked on a drawing course, followed by three years at the Vilna Academy of Art in Lithuania. Afterwards in 1913 Soutine moved to Paris to further his career.  He was alone for much of the time and poor but he allowed nothing to get in the way of painting.

Here, through the artist Jacques Lipchitz, he met Amedeo Modigliani. Theirs was a close if tempestuous friendship – aggravated by heavy drinking – despite their radically different temperaments and work styles.

They were a familiar sight on the town.  Modigliani drew out Soutine socially; he complimented him and encouraged him in his work, and his premature death deeply affected Soutine.  Alcohol was blamed and from then on Soutine limited his drinking.

Through Modigliani Soutine was introduced to art dealer Leopold Zborowski, who represented him from 1917 to his death in 1932.  He also benefited financially from the arrival of Dr. Albert Barnes, an American businessman, in Paris in 1922.

A discerning collector, intent on buying paintings for his Philadelphia Art Foundation, Barnes swiftly saw the quality of Soutine’s works: delighted by the painting of pastry cook Rémy Zocchetto, he bought the series of below stairs hotel and kitchen staff portraits* by the artist.  Barnes acquired some 52 paintings, maybe more, that have contributed substantially to Soutine’s posthumous success and recognition.

The artist’s fortunes continued to look up when he met Marcellin and Madeleine Castaing in the late 1920s.  Two of the most influential figures in his career, they became his patrons and supported him for the rest of his life.  For ten years Soutine was invited to stay and work at their pastoral retreat at Lèves.

Madeleine was a successful interior designer and her circle included cultured members of the French establishment, bringing Soutine into contact with leading lights such as Cocteau and Satie, and art historian Elie Faure, who became an enthusiastic champion of his work.

If he personally seemed one step away from self-destruct, many of his paintings were not spared.  We are lucky that any of his Céret landscapes survive.  Faure said of them: “In his studio, he lacerates them with rage.”

An impoverished Soutine spent time in Céret, a town in the Pyrenees, between 1919-1922, where he was unable to get on with other artists and locals.

Nonetheless, this period resulted in a series of his most distinctive and bacchanalian paintings.  Here, figures, landscapes and buildings are compressed, distorted and thrust towards the viewer on claustrophobic canvasses.

Madeleine Castaing recalls: “While he was painting, everyone … had to disappear.  We always waited in fear of that sinister noise.  If he didn’t like the painting, he’d take a knife and slash it…Then he had to like the painting when it was finished…He would call us to come and see it…If he saw the smallest trace of disappointment, he would grab the gasoline which he had next to him and a sponge…” 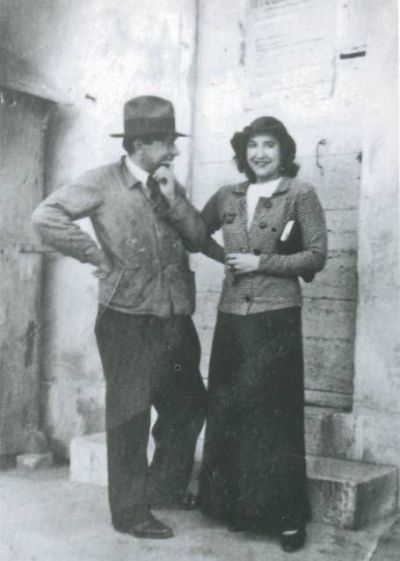 Soutine and Madeleine Castaing during the mid 1930s

Perhaps Soutine believed that his later work surpassed the Céret paintings that might have signalled a dead end – that is, he felt he could go no further in this artistic direction without straying too far into abstraction.  Or, perhaps, they were simply a reminder of a difficult period he would prefer to forget.

Soutine’s late period is generally considered to be from the mid-1930s to 1943. Some critics and writers have dismissed these works as regressive. He is accused of needlessly reining himself in and being so enthralled by past masters that it reduced the urgency and potency found in the earlier paintings.

Regardless of the reduced pictorial aggression—allowing the faces in his portraits to be averted, ridding them of their dramatic confrontational stares found in the earlier works, and producing landscapes that are more classically formal in structure—Soutine’s vision, energies and painting process in these late works remain consistent.

The images– landscapes, portraits, still-lives – are a natural progression from the artist’s earlier ones and reflect the artist’s dedication, throughout his career, to achieve ever-increasing clarity and concentrated expression.

Unfortunately, assessment of Soutine’s late paintings is hampered by the lack of them on public show (many are in private collections) and that they are disproportionately few in comparison with his earlier works; 100 paintings are known dating from the 1930s onwards, compared to 400 painted in the preceding 15 years. And that does not include the early paintings he destroyed!

During this latter part of his life and despite his notorious unsociability Soutine sustained close relationships with women.  He met Gerda Michaelis, a Jew from a prosperous family, who had fled Nazi Germany to live in Paris, where she was working as a house cleaner.  Gerda kept his studio and apartment clean and orderly, and helped him seek treatment for his crippling stomach pains.  They separated in 1940 at the onset of the Second World War.  Gerda survived but never saw Soutine again.

In November 1940 Soutine met Marie-Berthe Aurenche, recently divorced from the Surrealist Max Ernst.  With the Nazi threat looming she and her friends helped Soutine escape from Paris and he took refuge near Richelieu.

But the constant worry of living as a fugitive aggravated his stomach illness, and he was forced to return to Paris for urgent treatment.  After a treacherous journey into the city Soutine underwent an operation for his ulcer but he died soon afterwards on August 9th 1943.

Soutine was buried at Montparnasse Cemetery, the service attended by a small group of artists and friends, including Aurenche, Picasso and Cocteau.

Although Soutine cannot be described as an under appreciated artist internationally, he certainly has been overlooked in the UK.  Fashion and poor critical opinion have seen to this.  So this is a rare opportunity to see a collection of his portraiture. 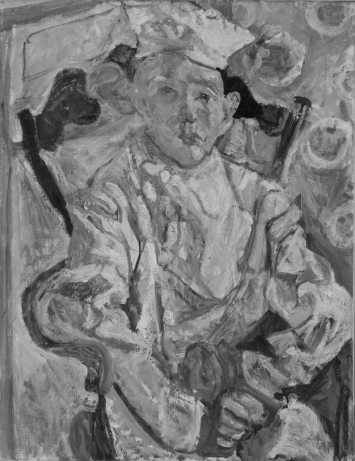