To date, many of those who tell me that there is significant contemporary art currently being shown in major cities are either in someway involved with the artist and their studio or stand to benefit from well-received opinions on such work.

Indeed, I tend to hear more about contemporary performance art than experience it first-hand. So, having been told that artist Anne Imhof is our era’s Caravaggio and coming by a complimentary ticket to her exhibition, Sex, with an original working title of Death Wish, in the tanks at Tate Modern, I sought to remedy this. 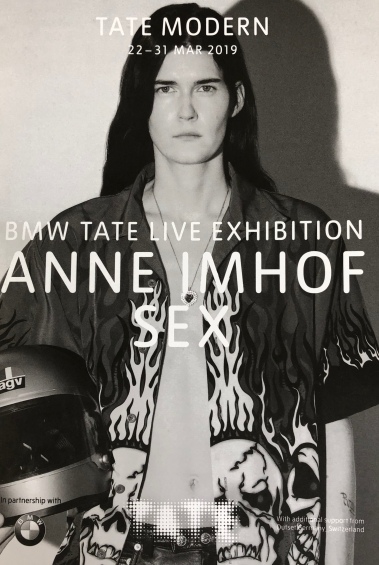 I missed the start but it did not seem to matter. The exhibition mainly took place in three rooms. The first resembled a chi-chi drug den, albeit as clean as a set up of this kind can be.

Alcohol abounded: as part of the action, the liberal opening of ‘tinnies’ throughout, Stella and Guinness proving particularly popular, and as a backdrop; the space littered with bottles and cans, and a spilt pool on the floor, interspersed with bongs, some gimpy leather accessories and mattresses.

It smelt like the village hall the morning after my seventeenth birthday, which removed what little edginess was intended. True, two performers did their best to create this: one slouching on the floor, slowly parting his legs at passing women; the other, glaring at the audience around the room, strode towards one corner of the space and stared at the wall.  Not exactly visionary…

Approaching the next space it looked as if an erratic kind of rave was taking place there. It was a dark cavernous space with strobe lights punctuated by occasional stabbing distorted electronic sounds. Referring to the famed Berlin night club someone in the crowd murmured, ‘Here comes the Berghain special.’ For what this show manages to do is make visitors stop, look and comment.

The audience made its way onto a raised platform towards the centre of the space, and unless one arrived quickly it was a challenge to see what was going on around this, not that there was much in the way of action.

Three white platforms running along one side were occasionally used by the performers: they might sit or lie down on these, or even vape. Vaping was as prevalent as drinking and many viewers seemed mesmerised by watching someone smoke.

Then a snap! The audience on the stage immediately moved itself closer to the source of this sound. A man with his back to the crowd whirled a whip above his head, bringing it down in successive flailing motions against a wall. This slashing continued for some time. 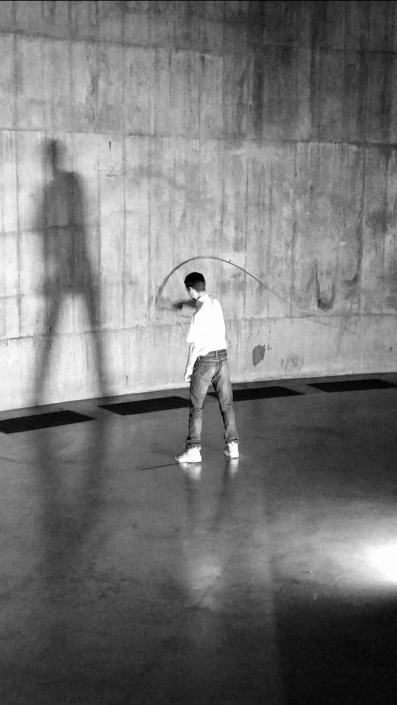 The audience who could see stood transfixed, those who could not looked up at an iPhone video recording above them. Alongside them another performer appeared and sat on the floor – more vaping ensued.

The performance, I was told, deliberately included multiple acts taking place at the same time, making it impossible to see the exhibition in its entirety, or at least in one visit.

So when noise from a neighbouring room jolted visitors from their stupor, they had to choose whether to rush there on the off chance of finding a prime viewing position, or remain where they were in the hope something significant (if happenings in this exhibition can be described as such) might happen. At which point there was the agonising choice to be made about persevering with the wall whipping or passing on.

Walking through Imhof’s show it was often more interesting to observe the audience – the security guards too. After a quiet period, and there were many, a few performers moved at their characteristically slow pace past a guard carrying bouquets of dried, withering flowers that had been set alight. The smell of charred flowers combined with that of the beer and vape smoke. If ever a face expressed, ‘Give me strength’, it was his.

Whether soaking members of the audience was in the script I don’t know, but two particularly well-dressed unsuspecting unfortunates were on the receiving end of an open can of Stella given a robust shunt out of a hole in a Perspex wall by a performer.  There was a short shriek from one of them and from then on the dramatic intensity level went up as the audience realised they could not be sure if they were about to become uncomfortably involved in proceedings.

The trick was to confound the audience by building up a sense of confusion, Imhoff managing to incorporate this uncertainty into the performance so that it became an integral part of the choreography. It went beyond normally understood audience participation where performers may acknowledge the off stage reaction but do not incorporate the audience response into the work.

No matter where one stood a performer might appear, slow and erratic like a zombie, or occasionally swift with flailing arms. Sometimes people were knocked. Meanwhile a stone-faced camera team patrolled. For the most part it was a nonsensical experience: when I was told that I was standing too close to a performer, I took one step to the side only to find the camera crew bearing down on me.

Periodically Imhof, complete with bodyguard, would spring up. She was hunched over her phone, issuing instructions to the cast – humour is lacking in this performance but despite this, or maybe by taking themselves oh so seriously, Imhof and the performers were offered this exhibition space in Tate Modern.

Actor Dennis Hopper’s comments on Andy Warhol’s 1964 film Empire came to mind: ‘I can understand the idea of running something like Sleep or running something like Empire at a party where you don’t have to concentrate constantly and see that one light come on the Empire State building. Somebody says, ‘Oh look a light went on!’ And you say, ‘Oh yeah, well, great, I missed it, I was dancing, you know.’

The film of The Empire State building was more than eight hours long, documented from a single view. Very little happens, lights switch on or off, and weather conditions may alter marginally.

What Warhol did then and Imhof does now is to lull viewers into a state of inertia: where a puff on a vape or a raised arm is enough of an action to get people shuffling vigorously to see what, if anything, no matter how negligible has happened.

In the booklet, handed out on leaving the show, Imhof said of her drawing and painting ‘…there’s a moment where it’s really important to know when to stop, because if you go on forever, it gets horrible’. In view of the interminable gaps in the action where we are simply waiting, perhaps she should adopt this approach to her performance works, too.

There was the option of adjourning to the entrance hall for a break if it all became too much. As one might expect, it seemed to me, the performers and most of the crowd were under thirty. It would be very interesting to see a show like this staged at the Royal Academy. How would an older demographic or family groups react?

A memorable experience, but not one I consider worth repeating. As art it did not register – and as for Imhof being likened to a twenty first century Caravaggio the comparison is fatuous. How can one compare late sixteenth and early seventeenth oil paintings with a 2019 performance in a Bankside basement in Southwark on a Thursday evening?